Yuzuriha has bright green eyes and bright green long hair that reaches below his waist. His hair is curled at the ends and his bangs are parted slightly to the left.

In his school uniform, Yuzuriha wears a fancy light purple dress shirt in place of the school standard shirt and ties a purple sash around his waist. He does not wear the school's standard vest and tie. His blazer is the Kao Council's blazer which he wears unbuttoned.

Flamboyant and energetic, Yuzuriha is the mood maker of the Kao Council. Compared to the other members, he acts a bit more childish.

However, he does take his duties as a member of the Kao Council seriously. He was in support of removing Otori from the council and demoting Team Otori to a regular team in order protect the traditions of Ayanagi Gakuen.

Yuzuriha was born in France. He moved to Japan right before starting high school at Ayanagi Gakuen.

During his first year, he became a member of Team Tsukigami. Along with teammates Sazanami, Akatsuki, Hiragi, and Otori, he trained under Tsukigami Haruto. When Otori voiced out his desire to add a different arrangement to "Ayanagi Showtime", like most of the team, Yuzuriha sided against the suggestion. With the exception of Otori who withdrew, Team Tsukigami eventually passed the screening process and entered the Musical Department.

During his second year, he joined the gardening club and planted many flowers on the campus grounds.

In his third year, Yuzuriha became a member of the Kao Council.

Yuzuriha first met Otori after the two were placed on Team Tsukigami during their first year. Otori would often give Yuzuriha advice, something that he loved him for. However, when Otori voiced out his desire to add a different arrangement to "Ayanagi Showtime", Yuzuriha sided against the suggestion.

Unlike Hiragi and Akatsuki, Yuzuriha never hated Otori for leaving. Although he pushed to remove him from the Kao Council, he did it in order to protect Ayanagi Gakuen's traditions. He later shows concern for Otori after he takes leave from school and promises to evaluate his team fairly.

Yuzuriha first met Sazanami after the two were placed on Team Tsukigami during their first year. Together with Hiragi and Akatsuki, they eventually passed the screening process and entered the Musical Department. In their third year, they both became members of the Kao Council. They've continued to be good friends and are often seen together. 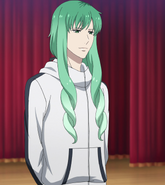 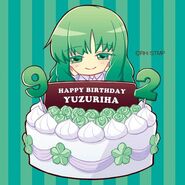 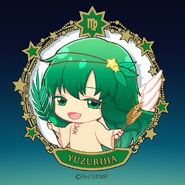 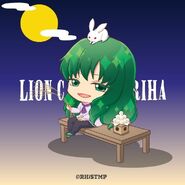 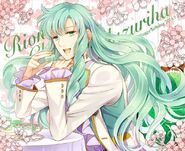 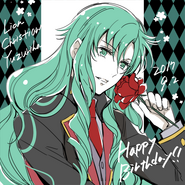 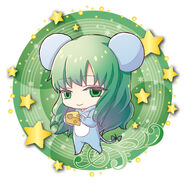 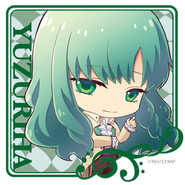 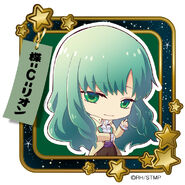