"You will be fine, Kaito. Enjoy your school life." - Tsukigami Haruto

Haruto has blue eyes and blue hair that is slightly darker than his younger brother, Kaito. He has long bangs which part to the left, sometimes covering his left eye.

In his casual wear, Haruto wears a 3/4 sleeved white shirt with a blue undershirt inside. Over his shirt, he wears an unbuttoned black vest and a pair of blue jeans with a belt. His shoes are a pair of brown and beige dress shoes. He also wears a ring-shaped necklace and a watch on his right hand.

Kind and mature, Haruto is the ideal older brother and upperclassmen. Although strict at times, he is supportive and only wishes well for others. He takes his work seriously.

He also appears to have a joking side to him as seen in the episode previews and in his character interview.

Haruto is considered a genius actor. He auditioned for and got a part in a Broadway musical while still in high school. In his third year, he joined the Kao Council and successfully coached Team Tsukigami (with the exception of Otori who left after the Newcomers' Debut Performance). Later on, he graduated Ayanagi Gakuen at the top of his class and became a famous Musical star.

Tsukigami is seemly on good terms with his brother from their interaction. However, as his brother is a famous Musical Star, he often gets overshadowed and people assume that he is just riding along his older brother's fame. Hence, if someone were to mention his older brother to him, he will snap at them. One example is during the interview stage of the auditions - he is shown storming out of the room angrily, supposedly caused by the mention of his older brother.

Haruto, on the other hand, cares very much for his younger brother. He asked Otori to take good care of him and frequently mentioned him during his character interview.

When the ancients were in their third years, they were in the Kao Council together. At the beginning of the year, when they were selecting members for their star teams, Haruto and Uozumi both wanted Otori on their star team, their competition was Rock, Paper, and Scissors. While Uozumi put out "Rock", Haruto put out "Paper". Therefore, Haruto won and Otori became a member of Team Tsukigami, Uozumi still holds a grudge towards him to this very day. 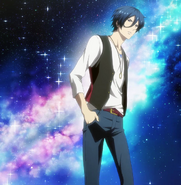 Ending Theme Full-length Image
Add a photo to this gallery

Episode 1 Full-length Image
Add a photo to this gallery 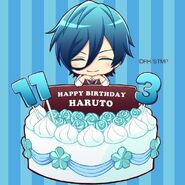 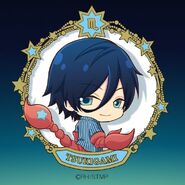 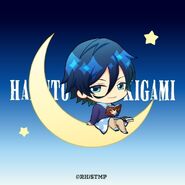 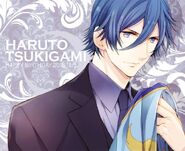 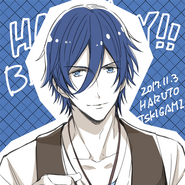 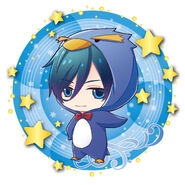 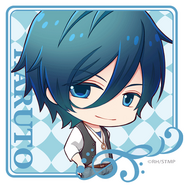 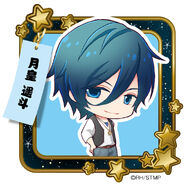 PASH! Magazine Mar '17
Add a photo to this gallery

Retrieved from "https://starmyu.fandom.com/wiki/Tsukigami_Haruto?oldid=10986"
Community content is available under CC-BY-SA unless otherwise noted.