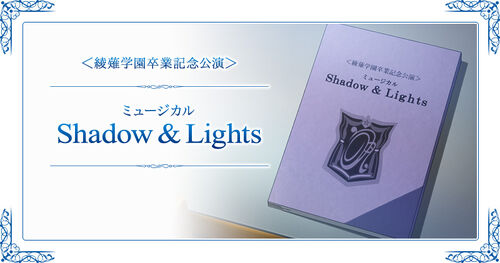 A stage actor who has a beautiful appearance, but has yet to take on a role and sell. A young man who is able to smile despite his predicament. However, he greatly cares about his best friend Alexis who quit his dream for him. He is the protagonist of this work, a role which requires delicate acting skills. Usually, the head of the graduates plays this role. Due to Hiragi debuting in Broadway, the cast is change to Hoshitani Yuta.

Son of a theater lord, a playwright who is unable to sell. Lambert is his childhood friend and best friend. He dreamt of becoming an actor with Lambert when he was young, but as he suffers injuries to his faces due to an accident which cut short his dreams. Since then, he close off his mind and withdrew to the attic of the theater. The other leading role, it is often acted by an actor who has skills and glamor.

An ambitious Broadway Musical Sponsor from America. He found out about Alexis' talent and plans to take him back to America for his own success... So called the villain. Has many points of views, and usually the Kao Council members play this role.

A detective which Lucas hires in the UK. His job is to search for the mysterious playwright・Alexis. Stands affirmative, but he is frivolous who loves liquor, women, and money. A role which plays comedy relief. Plays a big part in the scene of the capture in the latter half of the story and is often played by actors with high physical ability.

Lambert's and Alexis' Childhood friend, and Lambert's good counselor. He also gives important advice to Alexis. With an addition to the Kao Council, the role is also added starting from this term.It is desirable for actors with high adjustment ability to play this role as it interacts with the main characters all the time.

Stays close to Alexis and watches over him, not a human being. With cheerful and peaceful atmosphere with resembles Lambert. Alexis calls him 『My Angel』. Particularly important in the training role as it is a role with solo singing as a flower form..

Stuck closely to Lambert, and watches over him, not a human being. Dark and cold eyes are like Alexis. Lambert is afraid of him as it maybe the darkness of his own heart and calls it 『My Devil』. Although there is no speech, it is a major role that will most certainly collide with Lambert on stage.

Dynamic and glamorous is required, as it is a place to show off high-level dancing skills. Hence it is seen as more upbeat than Lambert, thus casting to balance with Lambert's role is always done.

Cliff's assistant. He is active as a comedy relief and has many lines. As the audience attention is always high for the role, the impression is always changed by the actor who plays for the year, hence the degree of flexibility of the character needs to be high.

Like Lambert, an actor who cannot sell. Envies the success of Lambert later on, and falls into suffering hence it is a role which requires delicate acting skills. Just like Percy's role, the impression of the character depends on the actor.

The stage is London. An era where theaters start to line up at the West End and show business started to flourish. A story of two young men, who are connected by the ties of play yet passes by each other.

The encounter of the son to the stage actor・Lambert and song of the theater god・Alexis.
Shy Lambert who is hiding behind the back of his father. And Alexis says to him.
「I'll give you my treasure.」
Alexis offers a collection of buttons which he treasures to Lambert.

The two of them quickly became closer, and begins to talk about their dreams in the attic of the theater.
Their dream is to become 『stage actors』.
Alexis was blessed with talent, and glamor that was suitable for an actor.
On the other hand Lambert has the confidence.
A close friend, Alexis strongly inspires him.

You can be anything on stage! A King, Scary~ Monster!
Let's stand on the stage together someday.
「Your future is my future. My future is your future.」the two says.

However the cheerful mood changes.
An unexpected accident forces him to quickly protect Lambert, and Alexis suffers from a terrible burn.
There is an indelible scar on Alexis' face, which cuts off his dreams as an actor.
『Let's stand on the stage together someday.』
At the time when their dreams move slightly――『Shadows』appears behind the two. Who exactly, are they......

Scene 2: The Appearance of Youth LambertEdit

Time passes―― Lambert is now a Youth.
He aims to succeed as an actor, and keeps on auditioning every day.
However, he has failed today's audition again.
As usual, he goes to the bar with fellow actor Orlando to comfort each other.

Orlando「This life, how long will it last. I don't want it.」
Lambert「Are you giving up?」
Orlando「I don't know. But someday 『Success』 or 『Give Up』, I'll have to choose either way......」

On the way home after parting ways with Orlando――Lambert met his childhood friend Eddy.
Lambert talks about Orlando's anguish.

Lambert「But, I can't give up. My dream, it's not just mine.」
Eddy「It's for Alexis......You have people everywhere. No matter who it is, they love you. Lambert.」

Positive and pure Lambert, Eddy praises him making him feel less disgusted with himself.
However, that kindness may someday destroy him.

Eddy「Well then. I wonder if I should head to Alexis' place today? I have a souvenir, take it.」

Taking the wine from Eddy, Lambert flees.
Watching him take off, Eddy laughs in shock.

Eddy 「I'm troubled. My childhood friend, is an actor that can't rise up, a playwright who is feared as a madman.」

Scene 4: The Small Theater of the West EndEdit

Scene 9: The Club where Cliff drinksEdit

Retrieved from "https://starmyu.fandom.com/wiki/Shadow_%26_Lights?oldid=9190"
Community content is available under CC-BY-SA unless otherwise noted.