Osananajimi Melancholy 2 is an original drama CD which was released on 22 August 2016 as a bonus for purchasing the October Issue of Sylph.[1] It features Tsukigami Kaito, Tatsumi Rui and Sawatari Eigo.

In Sawatari and Tatsumi's room, Tsukigami asks if it's really true that the two fought.  In a flashback, Sawatari explains the events that happened earlier that evening that caused Tatsumi to go to Tsukigami's room.  Afterwards, he asks Tsukigami to take Tatsumi's pillow to him.

Tsukigami goes back to his room and gives Tatsumi his pillow, telling him that Sawatari is worried.  Tatsumi asks him if he and Kuga ever fight, or if he and his brother fought when they were younger.  He then tells Tsukigami a story of when he and Sawatari were kids.

The next morning, Tsukigami runs into Sawatari who asks after Tatsumi.  Tatsumi arrives later and apologizes to Sawatari.  Sawatari also apologizes and says it was his bad, to which Tsukigami sighs and says that that's not it.  He tells Sawatari that he heard Tatsumi's story and clears things up between the two.  Afterwards, Sawatari and Tatsumi patch things up and things go back to normal. 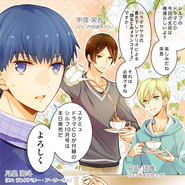 Retrieved from "https://starmyu.fandom.com/wiki/Osananajimi_Melancholy_2?oldid=10935"
Community content is available under CC-BY-SA unless otherwise noted.