Osananajimi Melancholy is an original drama CD which was released on November 21, 2015 as a bonus for purchasing the January Issue of Sylph.[1] It features Hoshitani Yuta, Kuga Shu and Toraishi Izumi.

School starts, and Hoshitani has forgotten his math textbook. He runs to Class B and yells out for Tsukigami and Kuga. As Tsukigami is doing cleaning duty, only Kuga is there. Hoshitani asks Kuga for his math textbook, which he agrees to lend. Kuga states that Hoshitani is lucky that Kuga was here instead of Tsukigami, for the latter does not forgive people who forget their stuff.

However, Kuga realizes that he doesn't have his math textbook because he lent it to someone yesterday - a person from Class C. Speaking of the devil, Toraishi walks in and greets Kuga, and Hoshitani learns that they are childhood friends. Hoshitani and Toraishi greet each other and get acquainted.

Kuga proceeds to ask Toraishi for his math textbook back, but Toraishi doesn't seem to remember where he placed it. He thinks back to previous day's events, and starts listing them. First, he waited at the school gate for his date to pick him up with her car (the pure-hearted Hoshitani is shocked upon hearing the word "date"). He recalls taking out Kuga's textbook while in the car as he tried to do his homework. Later, he went to karaoke with a female university student. When it was time for him to go back to the dorms, he was stopped by a female friend, which caused him to go to her house. Toraishi ends up not remembering where he placed the textbook and shrugs it off, saying it was "only a textbook."

While on the topic of textbooks, Toraishi remembers the reason why he came to Kuga's class is to borrow a textbook for another subject. This of course makes Kuga upset. Hoshitani tries to tell Toraishi to be more tactful, but Toraishi tells him to not worry because as childhood friends, he knows that Kuga wouldn't fret over a lost textbook.

However, Kuga tells Toraishi that someone who easily loses someone else's things isn't worthy of being his friend. With a scary face, he tells Toraishi to drop his carefree ways because the textbook Torashi lost was bought using his hard-earned money from his part-time jobs (delivering milk in the morning and newspapers at night). Toraishi is shocked, and Kuga apologizes to Hoshitani for not giving him the textbook he needed. Kuga then leaves, and Hoshitani asks Toraishi if it was really all right to not apologize to Kuga. Toraishi doesn't sweat it, and tells Hoshitani that Kuga will be fine the next day.

Two days pass, and Kuga's attitude towards Toraishi has changed. Hoshitani notices that Kuga is being strangely stubborn about the matter. When school has finished, Toraishi strolls up to Kuga and asks if he is free to go somewhere and hang out. Kuga shuts him down, saying that he has work after team practice. He tells Toraishi to go spend time with other people, something Toraishi has always done in the first place. Toraishi teases Kuga for still being hung up over the textbook. He proceeds to drag Hoshitani by the arm to get Hoshitani to hang out with him. Kuga grabs Hoshitani's other arm and warns him that Toraishi could be spying on Team Otori for Team Hiragi. The two battle it out for Hoshitani, each pulling on his arms until Hoshitani shouts at them to stop. Once they stopped, Kuga tells Toraishi to go away, with Toraishi bitterly telling Kuga that he didn't think his childhood friend was such a petty person.

After Toraishi leaves, Kuga explains to Hoshitani that this is a good "medicine" for Toraishi so that he could learn to appreciate things. Hoshitani realizes that Kuga is a kind person.

Hoshitani arrives back in his dorm room and is hungry. He's about to go out and eat when he bumps into Toraishi talking on the phone, saying that he'll be there in 10 minutes. Hoshitani whispers, "Oh! Is it a... date?" and Toraishi says no. Embarrassed, he discloses that it is for a job so that he could learn what it feels like to work and be able to replace the math textbook he lost. Hoshitani becomes happy and pats Toraishi on the back for being respectable. He asks if Toraishi is doing manual labor. Toraishi laughs, saying that that would be a waste of his appearances. Toraishi reveals that he is working as a model for a magazine. Hoshitani is surprised, telling Toraishi that the job doesn't sound like hard work at all.

The next day, Hoshitani is tired after worrying about Kuga and Toraishi all of last night. He spots Kuga and tells him about yesterday's exchange between him and Toraishi. Kuga asks why Hoshitani is telling him this, seeing as it has nothing to do with him. However, Kuga means well and tells Hoshitani to not worry.

Toraishi then calls out to Kuga and the three of them walk onto the open school ground, with a strong ominous wind blowing. Hoshitani, being the middleman, gets increasingly worried that the two are going to fight. Kuga apologizes for dragging Hoshitani out, but Hoshitani explains that he feels better knowing what they are doing.

Toraishi abruptly cuts in and apologizes with a deep bow. He shows Kuga the math textbook that he spent all of yesterday looking for. He explains that he didn't realize the importance of apologizing until he talked to Hoshitani. Toraishi says that he can't erase the fact that he lost the textbook and apologizes again, telling Kuga to hit him.

Kuga tells Toraishi to stop bowing, and Hoshitani misinterprets this as Kuga wanting to punch Toraishi's face. However, all Kuga does is flick Toraishi's forehead (which, according to Hoshitani, looked like it hurt). Kuga forgives Toraishi and explains that he wasn't all that angry in the first place. He just wanted to trouble Toraishi for a little bit. Kuga reveals that it was just something he received as a hand-me-down from an alumni.

Hoshitani feels relieved that everything was just a prank, but Toraishi becomes irritated. Kuga then playfully warns Toraishi that if he doesn't want to lose a kind childhood friend like Kuga, Toraishi should not be so overly carefree.

Toraishi's phone then rings, and it turns out to be a call from a woman in charge of his modeling schedule. He tells her that he will discontinue his modeling job, but he is quick to say "oh but if it's not related to work, we can go and have fun." She apparently agrees to it, and he says he's looking forward to meeting her at six that evening. He ends the call with a quick smooching sound.

His phone rings again, and this time, it is a call from a girl he refers to as his "koneko-chan" (meaning "kitten"). She wants to see him today, but he says he has made other plans. While he tells her he is free tomorrow, Hoshitani is bewildered over how Toraishi doesn't seem to have learned his lesson. Kuga prepares a fist (much to Hoshitani's horror) and explains to Hoshitani that at times like this, mere words will not get through to Toraishi. He punches Toraishi just after he purrs into his phone "...of course, I'll stay until the morning." 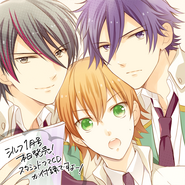