Tsumugi has light pink long hair which curls at the lower half and is tied into a mid-low ponytail on her left side. Her bangs are straight, covering her forehead. She has yellow eyes and her expression is often shown to be dead-pan.

Tsumugi wears her school uniform in the proper way except she wears a tie instead of a ribbon.

Between her and sister, Tsumugi is the least expressive of the two. As Yuki does most of the talking, Tsumugi usually makes a short comment after her sister. She is more negative as compared to Yuki who is more positive.

The two are known for their difficult to deal with personalities. If anyone disagrees with them or dismisses their sewing skills, they will talk back at the person.

However, they do have some good points as well. They both care about their older brother and would gladly help him out. They also know when they are to blame, as seen during the Newcomers' Debut Performance when they apologized to Team Otori for bringing their costumes so late.

Yuki is shown to be concerned about her older brother, Nayuki. From walking with him on his first day of school to giving him the family's secret recipe tea to calm his nerves, she and Tsumugi would gladly help him out. In turn, Nayuki deeply cares about his sisters. He tried to punch Tengenji, saying he wouldn't let him lay a finger on his sister after Tengenji called Yuki to ask her to lend him her body (although this was revealed to be a misunderstanding). However, Nayuki does see them as a last resort for help as he knows how much of a handful they are to deal with due to their personalities.

The two are shown to be very close, enough that they know what each other is thinking. Yuki does most of the talking between the two but Tsumugi will often give a short comment to follow-up her sister.

Tsumugi first met Tengenji after she and Yuki were asked by Nayuki to fix Team Otori's costumes for the Newcomers' Debut Performance. They originally got off to a rough start - Tengenji said that because of their bad personalities, the two of them would be cute if they didn't talk while Yuki and Tsumugi insulted him back and successfully made him apologize.

Later on, it appears that they are actually on good terms with one another. Tengenji is able to call Yuki to ask her to lend him her body and Yuki is able to understand that he is just asking her to bring the Nayuki family's secret recipe tea to the Ayanagi Festival. Later, he praises them for not being late and teasingly pats their heads. They punch him in return.

Ending Theme
Add a photo to this gallery

Episode 12
Add a photo to this gallery

Episode 6 Eyecatch 2
Add a photo to this gallery 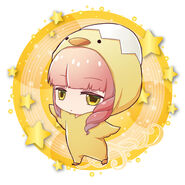 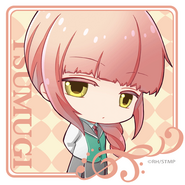 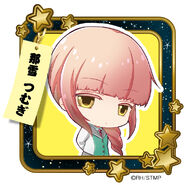 Retrieved from "https://starmyu.fandom.com/wiki/Nayuki_Tsumugi?oldid=10622"
Community content is available under CC-BY-SA unless otherwise noted.