Shion is a tall young man. He has white skin, short pink hair and purple eyes. At school, he normally wears the standard Kao Council uniform.

Shion is a kind, sensitive young man who cares about everyone around him.

Like the Spring, Shion is a supporter and worries about everyone's health especially Toma's. He brings a fresh air to the group. He is generally passive in his actions, however, there are times when he does get riled up especially whenever he is mad at Ryo.

Shion has been friends with Toma Shiki ever since their first year at Ayanagi. They first met when Shion, Masashi and their team were having trouble with their choreography and Shiki offered to tutor them.

After that, Shion became Shiki's devoted friend and fellow Kao Council Member. He is willing to do anything for Shiki and worries about his health constantly.

Masashi is Shion's friend and fellow Kao Council Member. They were teammates together during their first year together at Ayanagi and generally get along well. They are both staunch supporters of Toma Shiki.

Chiaki is Shion's friend and fellow Kao Council Member. Overall, they get along well, but there are times when Shion doesn't understand Chiaki. This is especially true when Chiaki starts having doubts about what to do with Ryo and his campaign to vote Shiki off the council due to their differing ideals. During this phase, Shion admits that he doesn't understand why Chiaki goes out of his way to help Ryo when he has already admitted to being on Toma's side.

Ryo is Shion's friend and fellow Kao Council member. As fellow council members, they generally get along well, but in truth Shion doesn't really like Ryo. While he respects Ryo's work ethic and hard drive, Shion hates the way Ryo acts cold and how he looks down on others.

This dislike eventually turns into full-blown hatred when Ryo starts rebelling against Toma as a result of Toma's decision of allowing Yuta Hoshitani and the others to perform at Opening Ceremony and starts making plays to remove him from the Kao Council. Shion even makes a curse doll and starts hammering it into a tree in a attempt to curse Ryo when Ryo announces his two stage plan.

Episode 4 End Card
Add a photo to this gallery 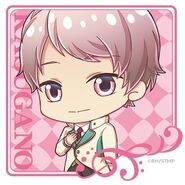 Retrieved from "https://starmyu.fandom.com/wiki/Kasugano_Shion?oldid=11036"
Community content is available under CC-BY-SA unless otherwise noted.