"Like I said, there's no meaning to it. So let's be friends!" - Hoshitani Yuta

Hoshitani has bright, green eyes and light brown hair which sticks out slightly at the back of his head. His bangs are somewhat long and centered, though slightly parted to the left.

Hoshitani wears his school uniform in the proper way.

In his training attire, he wears a black zip hoodie with white trims on the pockets and a white line that starts at his shoulders and goes all the way down the sleeves. He wears the sleeves 3/4 down his arms. His hoodie is zipped halfway up and he wears a green v-neck t-shirt inside. He wears a pair of black pants which stop below his knee and a pair of black dancing shoes.

Usually, many people's first impression of Hoshitani is that he is a cheerful person. As described by Tengenji, Hoshitani is naive and overly positive. He is also very friendly, greeting people he knows whenever he sees them. He would help out those in need and has a 'never give up' attitude.

On a rainy day, during autumn of his 2nd year in middle school, Hoshitani chanced upon a high schooler from Ayanagi Gakuen with the Musical Department's emblem during the Ayanagi Festival. He was amazed by the dance the high schooler did at that time and decided at that point that he wanted to follow in his footsteps. He did not know that the identity of the high schooler was Otori Itsuki. Knowing only what school the mystery student went to, Hoshitani applied to and entered Ayanagi Gakuen in order to one day be on the same stage as the one who inspired him to perform.

In Ayanagi Festival, Nayuki confessed to Hoshitani that he really liked him because of how Hoshitani had helped him and their teammates with their problems and how he turned them into a real team.

Nayuki looks up to Hoshitani as an inspiration. He supports and trains with Hoshitani during Hoshitani's special training. Hoshitani notes that Nayuki is a bit like his mother when Nayuki does things like waking him up and making bento for him.

Tengenji's view on Hoshitani changed after he found out that Hoshitani and Nayuki had been searching for his cat throughout the entire night. In return, Tengenji gave tips to Hoshitani on how to improve. Touched, Hoshitani declared that Tengenji would be his friend despite the protest of the other.

During their first practice where they had to improvise after they found out that there were no more lines in the script, Kuga handed Hoshitani a piece of empty paper, not expecting Hoshitani to get it. However, Hoshitani did and they managed to pull off the play without a hitch. Hence that day onwards, he views Hoshitani as an interesting person.

Kuga finally opened up to the rest of the team when Hoshitani and Nayuki chanced upon him playing the piano. Hoshitani suggested that they dance to Kuga's playing. Kuga refused, stating his noodles would turn soggy. Nayuki was surprised to hear that was all he was eating for lunch and offered rice balls to him which he accepted. When Hoshitani offers Kuga to practice with them, Kuga says he will if he has the time.

Later on, Hoshitani became depressed after watching Team Hiragi's practice. Kuga encouraged him by telling him his own motivation for doing musicals and saying that it was okay to be worried because there is no one who just smiles all the time.

Otori first noticed Hoshitani during the interview portion of the first round of auditions. He recognized Hoshitani's dance as one he had once performed. He then placed Hoshitani on his Star Team with the hope that he and the other members of Team Otori will change Ayanagi Gakuen. Even though he hasn't told Hoshitani that he is the same high schooler Hoshitani saw dancing two years ago, he soon found out when Nayuki gave him the photo of a young Otori in middle school.

Hoshitani admires and respects Ootori. Although he is a bit strange, Hoshitani likes how his practices are interesting and how he thinks of fun things for Team Otori to do. He was greatly affected when Otori left. After knowing the truth on why Otori left, Hoshitani confronted him. When Otori asked him to give up his dreams to let Otori stay by his side, Hoshitani chose to not give up on his dreams.

After learning that Ageha and himself shared a similar dream, he tried to befriend Ageha. After an event occurs, the two aren't just rivals, but they become friends.

OVA 1 Full-length Image
Add a photo to this gallery 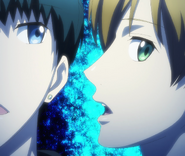 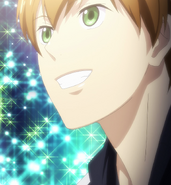 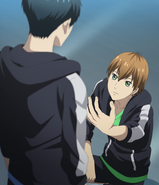 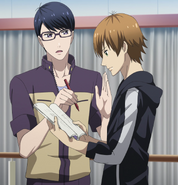 Episode 10 Full-length Image
Add a photo to this gallery

Episode 9 End Card
Add a photo to this gallery 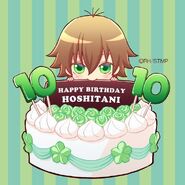 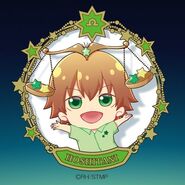 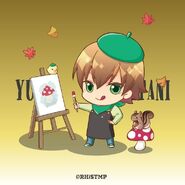 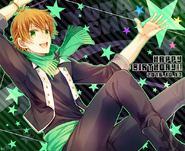 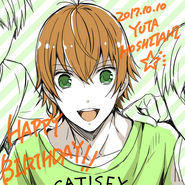 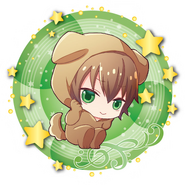 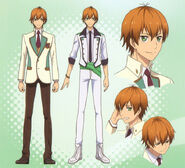 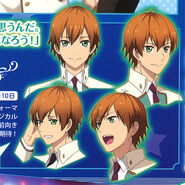 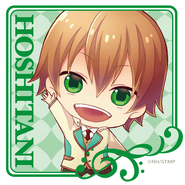 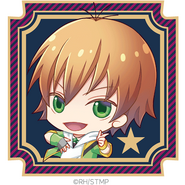 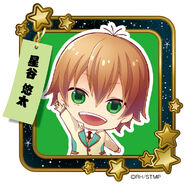 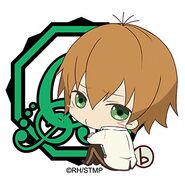 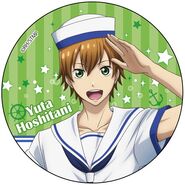 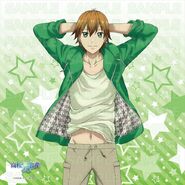 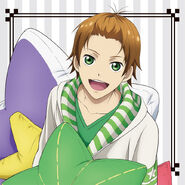 Retrieved from "https://starmyu.fandom.com/wiki/Hoshitani_Yuta?oldid=10853"
Community content is available under CC-BY-SA unless otherwise noted.